Call For Best Price:1-800-201-1193
customer id--
The store will not work correctly in the case when cookies are disabled.
Skip to Content
Menu 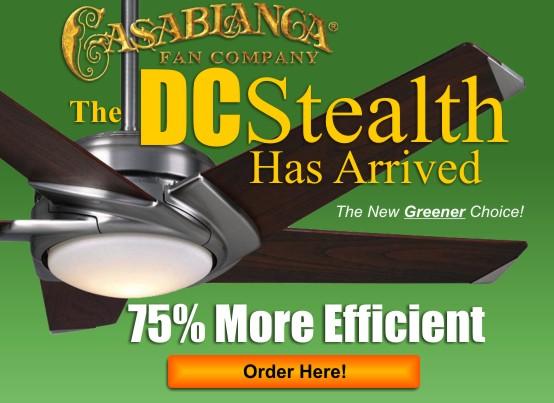 Emerson Midway Eco
A frantic shuffle began taking place in the R&D labs of ceiling fan manufacturers ever since Emerson introduced the Midway Eco in the summer of 2009. Being the first ceiling fan to use a Super Efficient DC motor, the Midway Eco proved to be over 300% more efficient than any other fan on the market and set a new standard for performance and energy savings. When the Eco fan was first introduced, I predicted that it would revolutionize the ceiling fan industry (read original article from 2009), and that revolution has begun.

Emerson has since added even more ceiling fans with DC motors and continues to remain on the forefront of the DC motor revolution. Several other ceiling fan manufacturers have been busy fitting DC motors into some of their fans, but the most notable introduction this year is from Casablanca Fan Company who recently announced they had begun production of their famous Stealth ceiling fans with the option of a new super efficient DC motor. This new Stealth is sure to give the Emerson Eco fans a run for the money.

What's the difference between an AC and a DC ceiling fan motor?

DC motors have their own built-in electromagnets, while AC motors create their electromagnetic field by using electricity. So DC motors run cooler and provide more torque while using substantially less electricity. They also require sophisticated electronics in order to operate, so they are more expensive to manufacture. You can read more about DC ceiling fan motors here!

A Brief History of the Casablanca Stealth

The Stealth is the Grand-Daddy of all contemporary ceiling fans. Originally introduced in 1991, the Stealth was a revolutionary design of the time being the first ceiling fan that had the blades positioned around the center of the motor instead of beneath it. Integrating a single low profile halogen light fixture into the bottom of the fan resulted in a sleek striking contemporary style that set the foundation for most contemporary ceiling fans on the market today. The Stealth gained popularity and notoriety being featured in contemporary design magazines and other publications. It took other ceiling fan manufacturers several years to come up with their own contemporary designs to compete with the Stealth. To this day, most contemporary style ceiling fans are fashioned using the trend-setting unibody design of the Stealth, but none rival it's original timeless look. Now, with the addition of a DC motor, the Stealth takes on a fresh new appeal by incorporating the latest performance-inhancing energy-saving technology. Even more, they have now replaced the old 100 watt halogen light with an equivalent LED light that uses only 14 watts (introduced in 2015).

The graphs below compare the performance of the original Casablanca Inteli-Touch Stealt, DC Stealth, DC LED Stealth and the Emerson Midway Eco.

Why is this different than the label on the box?
Breeze rating Info Breeze rating is from 1 to 5 where 5 is the strongest breeze!
80
Wind Speed Factor Info The higher the Wind Speed Factor the cooler you will feel! 3.33 MPH
Graph represents 54" blade span
How to read our graphs
Inteli-Touch Stealth (2009)

The new DC Stealth produces a similar amount of airflow as the older Inteli-Touch stealth while using substantially less electricity. The Inteli-Touch Stealth uses 118 Watts while the new DC version only uses 32 Watts. The Efficiency Rating has improved by 75%: going from a below average of 53 to a super high level of 190 making the Stealth among the most efficient ceiling fans on the market, although not as efficient as the Emerson Eco fans. FYI: Efficiency is defined by the EPA as the airflow produce divided by the watts used (CFM/WATTS). After being in the ceiling fan business over 25 years, it takes a lot to excite me...and Casablanca has done just that with this new DC Stealth and DC LED Stealth.

So the bottom line is...the ceiling fan DC Motor revolution has begun and you now have several excellent choices when it comes owning a super efficient ceiling fan with a DC motor. Emerson also introduced several more ceiling fans with DC motors this year that are more traditional in style than the Midway Eco. You can view them here: Emerson Eco Ceiling Fans.